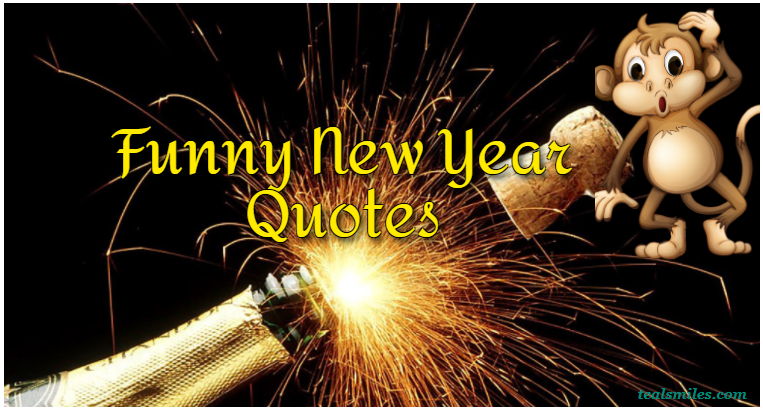 What’s more than to start a new beginning with a bit of humour. There are many comical aspects the New Year brings with it. A little humour on New Year’s wishes can make everything better. So let the poets, authors, and comedians help you make your dear ones laugh this holiday season with these undeniably funny Happy New Year’s quotes.

Send some sarcastic or hilarious New Year Quotes to your close ones and make them laugh their heart out.

“Good resolutions are simply checks that men draw on a bank where they have no account.”

“What the new year brings to you will depend a great deal on what you bring to the new year.”

“A New Year’s resolution is something that goes in one year and out the other.”

“Last year’s resolution was to lose 20 pounds by Christmas. Only 30 pounds to go.”

“May the New Year bring you significantly more joy than the holidays did.”

“Happy New Year! Let’s eat, drink, and be merry — for tomorrow we diet!”

“All I wish this new eve comes with a lot of joys for you since you look ugly while crying. Happy New Year!”

“May this New Year bring actual change in you, nor recurrence of old habits in a new package.”

“I think I made too many New Year’s resolutions this year. It took me almost a full day to break them all.”

“Here’s to a new year doing the same old habits.”

“Remember when we were young and wanted to stay up for New Year’s? Now we’re old and all we want to do is sleep.”

“Many people look forward to the New Year for a new start on old habits.”

“Making resolutions is a cleansing ritual of self – assessment and repentance that demands personal honesty and, ultimately, reinforces humility. Breaking them is part of the cycle.”

“A New Year’s resolution is something that goes in one Year and out the other.”

“It wouldn’t be New Year’s if I didn’t have regrets.”

“Never tell your resolution beforehand, or it’s twice as onerous a duty.”

Every New Year is the direct descendant, isn’t it, of a long line of proven criminals?

“May all your troubles last as long as your New Year’s resolutions!”

A new year’s resolution is something that goes in one year and out the other.

“My New Year’s Resolution List usually starts with the desire to lose between ten and three thousand pounds.”

“Out with the old, in with the new” is a fitting expression for a holiday that is based on vomiting.

“I can’t believe it’s been a year since I didn’t become a better person.”

Every New Year’s I have the same question: “How did I get home?”

My New Year’s Resolution List usually starts with the desire to lose between ten and three thousand pounds.

Cheers to a new year and another chance for us to get it right.