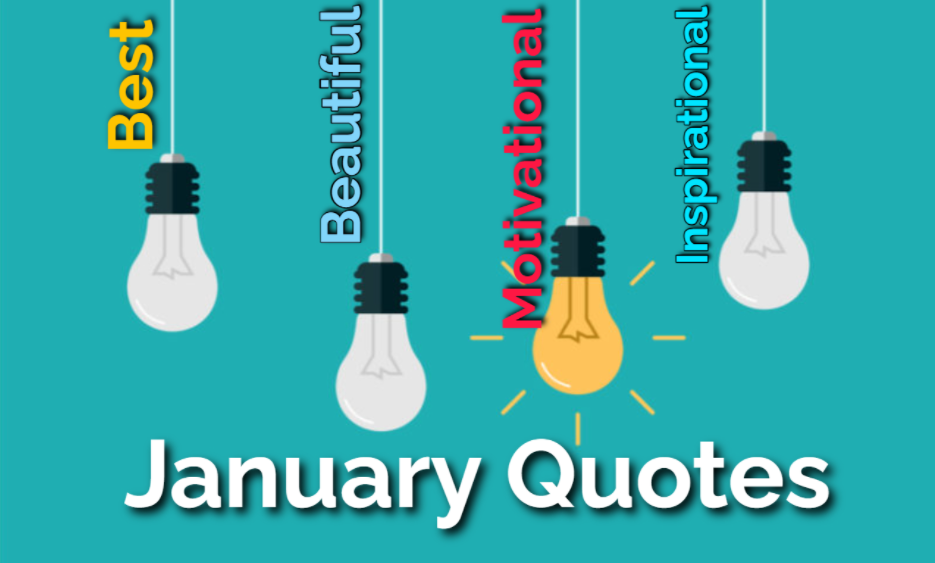 Best Motivational January Quotes To Usher You Into The New Year: Being the first month of the New Year, there are a lot of expectations riding on January. People want their New Year to be great with that famous fresh January start.  Find well meaningful quotes about January to inspire, motivate, elevate, usher you into a year of new beginning.

January Quotes About The Month

“Feeling a little blue in January is normal.”  ― Marilu Henner

“Lots of people go mad in January. Not as many as in May, of course. Nor June. But January is your third most common month for madness.”  ― Karen Joy Fowler

you’re enjoying these quotes, make sure to read our collection of snow quotes that celebrate the winter season.

“January looks forward to the new year and back to the old year. He sees past and future.”  ― M.L. Stedman

“If I had my way, I would remove January from the calendar altogether and have an extra July instead.”  ― Roald Dahl

These are some of the most poetic quotes you will find for the month of January.

“To read a poem in January is as lovely as to go for a walk in June.” ― Jean Paul.

“I love the Mediterranean for the fact that winter is over in a minute, and the almond blossom arrives in January.” ― Jade Jagger.

“January is my favorite month, when the light is plainest, least colored. And I like the feeling of beginnings.” ― Anne Truitt.

“Married when the year is new, he will be loving, kind and true… Married in January’s roar and rime, widowed you’ll be before your prime.” ― New Zealand proverb.

“Somewhere along the way, I realized that the new year doesn’t begin for me in January.” ― Betsy Cañas Garmon.

“Leaving a bookstore is hard, especially on a day in January, when the ice is treacherous, the wind is blowing, and the books inside seem to gather together in colorful warmth.” ― Jane Smiley.

“January 26th. The day when nothing remarkable happens to anyone else.” ― Ashley Newell, ‘Freakhouse’.

“January is here, with eyes that keenly glow, a frost―mailed warrior striding a shadowy steed of snow.” ― Edgar Fawcett.

“There are two seasonal diversions that can ease the bite of any winter. One is the January thaw. The other is the seed catalogs.” ― Hal Borland.

“Write it on your heart that every day is the best day in the year.” ― Ralph Waldo Emerson.

“In the depth of winter, I finally learned that there was in me an invincible summer.” ― Albert Camus.

“It is deep January. The sky is hard. The stalks are firmly rooted in ice.” ― Wallace Stevens.

“January is the quietest month in the garden… But just because it looks quiet doesn’t mean that nothing is happening.” ―Rosalie Muller Wright.

“Nature has undoubtedly mastered the art of winter gardening and even the most experienced gardener can learn from the unrestrained beauty around them.” ― Vincent A. Simeone.

“Winter dawn is the color of metal, the trees stiffen into place like burnt nerves.” ― Sylvia Plath.

“I love the scents of winter! For me, it’s all about the feeling you get when you smell pumpkin spice, cinnamon, nutmeg, gingerbread and spruce.”  ― Taylor Swift

“Snow brings a special quality with it, the power to stop life as you know it dead in its tracks.”  ― Nancy Hatch Woodward

“Thank goodness for the first snow, it was a reminder – no matter how old you became and how much you’d seen, things could still be new if you were willing to believe they still mattered.”  ― Candace Bushnell

“To appreciate the beauty of a snowflake, it is necessary to stand out in the cold.”  ― Aristotle

“Welcome, winter. Your late dawns and chilled breath make me lazy, but I love you nonetheless.”  ― Terri Guillemets

“Winter blues are cured every time with a potato gratin paired with a roast chicken.”  ― Alexandra Guarnaschelli

“Winter forms our character and brings out our best.”  ― Tom Allen

“Through the chill of December the early winter moans… but it’s that January wind that rattles old bones.” ― John Facenda.

“Winter blues are cured every time with a potato gratin paired with a roast chicken.” ― Alexandra Guarnaschelli.

“I pray this winter be gentle and kind — a season of rest from the wheel of the mind. “  ― John Geddes

“Let us love winter, for it is the spring of genius.”  ― Pietro Aretino

“Many human beings say that they enjoy the winter, but what they really enjoy is feeling proof against it.”  ― Richard Adams

“In the depth of winter, I finally learned that there was in me an invincible summer.”  ― Albert Camus

“Winter is a season of recovery and preparation.”  ― Paul Theroux

“The new year stands before us, like a chapter in a book, waiting to be written.”  ― Melody Beattie

“Change can be scary, but you know what’s scarier? Allowing fear to stop you from growing, evolving, and progressing.”  ― Mandy Hale

“A New Year has tiptoed in. Let’s go forward to meet it.”  ― Anusha Atukorala

“You can get excited about the future. The past won’t mind.”  ― Hillary DePiano

“Each day is a new beginning, the chance to do with it what should be done and not to be seen as simply another day to put in time.”  ― Catherine Pulsifer

“Every single year, we’re a different person. I don’t think we’re the same person all of our lives.”  ― Steven Spielberg

“Be at war with your vices, at peace with your neighbors, and let every new year find you a better man.”  ― Benjamin Franklin

“The magic in new beginnings is truly the most powerful of them all.”  ― Josiyah Martin

“New year – a new chapter, new verse, or just the same old story? Ultimately we write it. The choice is ours.”  ― Alex Morritt

“What the new year brings to you will depend a great deal on what you bring to the new year.”  ― Vern McLellan

“Take a leap of faith and begin this wondrous new year by believing.”  ― Sarah Ban Breathnach

“The beginning is the most important part of the work.”  ― Plato

“You are never too old to set another goal or to dream a new dream.”  ― C.S. Lewis

“Intention without action is an insult to those who expect the best from you.”  ― Andy Andrews

“Every ceiling, when reached, becomes a floor, upon which one walks as a matter of course and prescriptive right.”  ― Aldous Huxley

“If you want to be happy, set a goal that commands your thoughts, liberates your energy and inspires your hopes.”  ― Andrew Carnegie

“It’s harder to stay on top than it is to make the climb. Continue to seek new goals.”  ― Pat Summitt

“If a goal is worth having, it’s worth blocking out the time in your day to day life necessary to achieve it.”  ― Jill Koenig

“If you want to live a happy life, tie it to a goal, not to people or things.”  ― Albert Einstein

“You should set goals beyond your reach so you always have something to live for.”  ― Ted Turner

“The greater danger for most of us isn’t that our aim is too high and miss it, but that it is too low and we reach it.”  ― Michelangelo

“The trouble with not having a goal is that you can spend your life running up and down the field and never score.”  ― Bill Copeland

“Setting goals is the first step in turning the invisible into the visible.”  ― Tony Robbins

“A dream becomes a goal when action is taken toward its achievement.”  ― Bo Bennett

“A good goal is like a strenuous exercise – it makes you stretch.”  ― Mary Kay Ash

“Treat every day like it’s a new year because it is.” ― Temitope Ibrahim.

“Let all the failures of your past year be your best guide in the New Year.” ― Mehmet Murat ildan

“There is always an opportunity to start again and again, if the old ways are not working last year, look for better ways of doing it in the new year and start again afresh.” ―  Bamigboye Olurotimi

“Dickensian poverty tends to occur after Christmas in January. For it is then, with pockets empty, diary decimated and larder bare, that the general populace sinks into a collective pauper’s hibernation until Valentine’s Day.” ―  Stewart Stafford

“Let us do something incredible this New Year: Let us try to see the world from the window of other cultures!” ―  Mehmet Murat ildan

“Here is an unchanging truth valid for all the New Year’s: The more you believe in luck, the less successful you will be!” ―  Mehmet Murat ildan

“Every year is a chess game. New Year is a new chess game! You make the right moves, you win the game!” ―  Mehmet Murat ildan

“I love beginnings. If I were in charge of calendars, every day would be January 1.” ― Jerry Spinelli.

“The magic in new beginnings is the most powerful of them all.” ― Josiyah Martin.

“January? The month is dumb. It is fraudulent. It does not cleanse itself.” ― Anne Sexton.

“I like starting projects in January. That’s the best time to start something. It’s so inward.” ― Carolyn Chute.

“There’s something I love about how stark the contrast is between January and June in Sweden.” ― Bill Skarsgard.

“If I had my way, I’d remove January from the calendar altogether and have an extra July instead.” ― Roald Dahl.

“Let January open with the joy in the Lord, and December close with gladness in Jesus.” ― Charles H. Spurgeon.

“January is the Monday of months.” ― Unknown*.

“January is the garbage can of movies in America, directly after all the Oscar contenders have been out.” ― Michael Caine.

“Cheers to a new year and another chance for us to get it right.” ― Oprah Winfrey.

“The shortest day has passed, and whatever nastiness of weather we may look forward to in January and February, at least we notice that the days are getting longer.” ― Vita Sackville―West.

“I think it would be more sensible if resolutions began generally on January the second.” ― Helen Fielding.

“New year—new verse, a new chapter, or just the same old story? Ultimately we write it. The choice is ours.” ― Alex Morritt.

“January is the best time of year for gym owners. You all come. It’s great! And then, by Valentine’s Day, you’re not coming in anymore.” ― David Kirsch.

“I think in terms of the day’s resolutions, not the year’s.” ― Henry Moore.

“No one ever regarded the first of January with indifference.” ― Charles Lamb.

“January looks forward to the new year and back to the old year. He sees past and future.” ― M. L. Stedman.

“No one has ever achieved financial fitness with a resolution in January that’s abandoned by February.” ― Suze Orman.

“Feeling a little blue in January is normal.” ― Marilu Henner.

“An optimist stays up until midnight to see the New Year in. A pessimist stays up to make sure the old year leaves.” ― Bill Vaughn.

“Every man should be born again on January first. Start with a fresh page.” ― Henry Ward Beecher.