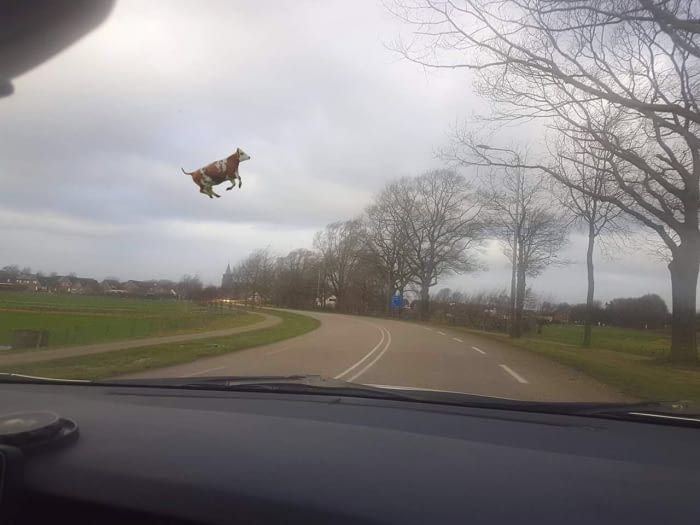 You’ll laugh up a storm with these funniest jokes and puns! Going outdoors on a not-so-good weather day can be harmful as Storms are violent meteorological phenomena which mainly include heavy rain, wind, lightning, and hailstorms. Also, Stormy weather, lightning and hurricanes offer some great jokes for kids. If your little one is afraid of bad weather and thunderstorms, jokes are a great way to lighten the mood when the rain comes.

If you are sitting in your home or with friends, then you can surely check out these stormy puns questions and answers to brighten up your day with some good laughs.

Q: Why don’t owls mate during storms?
A: Because it’s too wet to woo

Q: How do hurricanes see?
A: With one eye

Q: What do lightning bolts do when they laugh?
A: They crack up.

Q: Put my bin out this morning but the storm blew it away
A: It went wheelie high

Q: Why is it really difficult to sneak up on a hurricane?
A: Because they’re always turning around.

Q: Why was the sky not happy on clear days?
A: It had the blues.

Q: I debated a flat earther once. He got so mad he stormed off saying he would walk to the edge of the earth to prove me wrong.
A: He’ll come around eventually.

Q: Ever since the storm started, my husband won’t stop looking through the window.
A: If it gets any worse, I will have to let him in

Q: What did one big tornado say to the other little tornado?
A: Let’s go ahead and twist again like we did last summer.

Q: What do hurricanes most like to order for dessert?
A: Candy canes.

Q: Who was the meteorologist’s favorite relative?
A: His anti-cyclone.

Q: How do lightning bolts laugh?
A: They crack up.

Q: Storm Eunice has caused damages to English Football stadiums
A: All but Tottenham Hotspur stadium, have reported damages have taken place in the trophy cabinet.

Q: Did you see the new movie about a tornado?
A: It’s got a great twist.

Q: Why do you have to act quickly during a flood?
A: Because it’s an emergent sea.

Q: What do you call it when you a cross a classic card game with a hurricane?
A: Bridge over troubled water.

Q: Why do hurricanes move so fast?
A: Because if they moved slowly, we’d have to call them slow-i-canes

Q: What kind of lightning likes to play sports?
A: Ball lightning

Knock Knock
Who’s there?
Hurricane
Hurricane who?
Hurry! Cane you run away from the storm?

My wife came home from work and stormed into the bedroom.
She looked at me, sat on the edge of the bed, and sighed deeply.

“I get the impression you aren’t being loyal to me,” she said.

“You’ve been very quiet recently,” she continued, “and you’re always hanging around with that woman from work…Rachel?”

“Rochelle,” coughed a voice from the wardrobe.