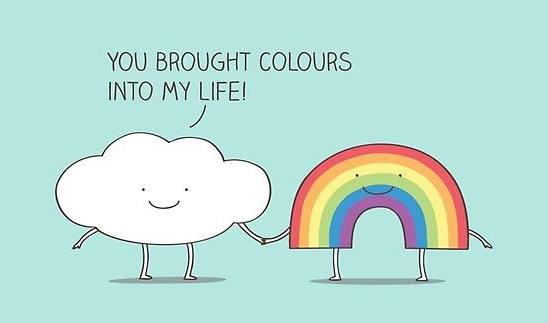 Best Rainbow Question and Answer Jokes: Rainbows provide great inspiration for humor. Where there’s rain, not far away you can usually find a beautiful rainbow. Find funny collection of friendly good jokes and puns about rainbow that are clean and safe for adults and children of all ages. Here are our best rainy rainbow jokes.

Q: What did the rainbow say to the pot of gold?
A: You’ll be the end of me.

Q: Who is the Greek goddess of rainbows?
A: Diffractodite.

Q: It’s illegal to reach the end of a rainbow
A: If you find it, you go to prism.

Q: What happens to a rainbow when it breaks the law?
A: It goes through the prism system

Q: What do you call allies who color things in rainbows to show support for Pride?
A: Dye-er Straights!

Q: What do you call a deceitful little criminal who lives at the end of the rainbow?
A: A leprechaun artist!

Q: What do rainbows do in prison?
A: They refract on what they have done.

Q: What did the rainbow say to the pot of gold?
A: You’ll be the end of me.

Q: The sky had a rainbow color to it today.
A: I guess the sun’s coming out.

Q: Where do bad rainbows go?
A: Prism.

Q: Why did the leprechaun climb over the rainbow?
A: To get to the other side!

Q: What do you call a magician wearing a rainbow colored suit?
A: Hue-dini

Q: I have a remarkable ability to see numbers as rainbow colors
A: But I can only count to seven

Q: What did the baby find at the end of the rainbow?
A: A potty gold.

Q: What did Lieutenant Worf say when he made rainbow T-shirts with his son?
A: “Today *is* a good day to dye!”

Q: How does the rain tie its shoes?
A: Using a rainbow.

Q: How does the rain tie its shoes?
A: With a rainbow

Q: I ate some rainbow candy that I was a little concerned about;
A: I’m okay now; it passed with flying colors

Q: How do you wrap a cloud?
A: With a rainbow

Q: Why isn’t there any gold in a rainbow?
A: Because it’s all in a pot at the end of the rainbow!

Q: Why is a rainbow the pride flags colors.
A: Because it’s the first thing you see when the sun comes out.

Q: What do you call a rainbow without any colors?
A: A plainbow.

Q: Why are rainbows always happy?
A: Because they just got out of prism.

Q: How much does a Rainbow weigh?
A: I don’t know for sure, it’s Light!