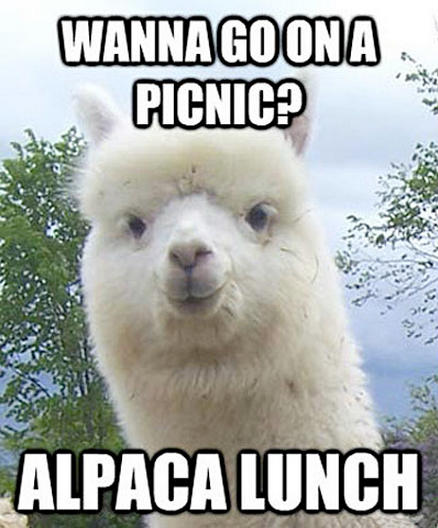 Are you dying to start an alpaca farm? Well, we do have some jokes for you! Alpaca and llamas are very similar to look at, and the easiest way to tell them apart is by their ears, alpaca have pointed, spear shaped ears while llama have ears shaped more like bananas; also llamas are twice the size of their little alpaca pals. Here are some hilarious Alpaca Jokes.

Q: Wanna go on a picnic?
A: Alpaca lunch.

Q: What do you call Alpacas taking over the world?
A: The Alpacalypse.

Q: What do you call an alpaca with a carrot in each ear?
A: Anything you want as he can’t hear you!

Q: Do you love my new alpaca coat?
A: I wool lend it to you if you like!

Q: What did the grape say when the alpaca stood on it?
A: Nothing, it just let out a little wine!

Q: Why did the alpaca cross the road?
A: To prove to the possum that it could be done!

Q: When does a alpaca go “moo”?
A: When it is learning a new language!

Q: What do you call it when Alpacas sing?
A: Alpacapella.

Q: What’s more amazing than a talking alpaca?
A: A spelling bee!

Q: What did they alpaca say to the blade of grass?
A: Nice knawing you!

The devout cowboy lost his favorite Bible while he was mending fences out on the range.
Three weeks later, a Alpaca walked up to him carrying the Bible in its mouth.
The cowboy couldn’t believe his eyes.
He took the precious book out of the Alpacaes mouth, raised his eyes heavenward and exclaimed, “It’s a miracle!”
“Not really,” said the Alpaca. “Your name is written inside the cover.”

A man in a movie theater notices what looks like a Alpaca sitting next to him.
“Are you a Alpaca?” asked the man, surprised.
“Yes.”
“What are you doing at the movies?”
The Alpaca replied, “Well, I liked the book.”

A man and his pet Alpaca walk into a bar. It’s about 5pm, but they’re ready for a good night of drinking.
They start off slowly, watching TV, drinking beer, eating peanuts. As the night goes on they move to mixed drinks, and then shooters, one after the other.
Finally, the bartender says: “Last call.”
So, the man says, “One more for me… and one more for my Alpaca.”
The bartender sets them up and they shoot them back. Suddenly, the Alpaca falls over dead.
The man throws some money on the bar, puts on his coat and starts to leave.
The bartender, yells: “Hey buddy, you can’t just leave that lyin’ there.”
To which the man replies: “That’s not a lion, that’s a Alpaca.”