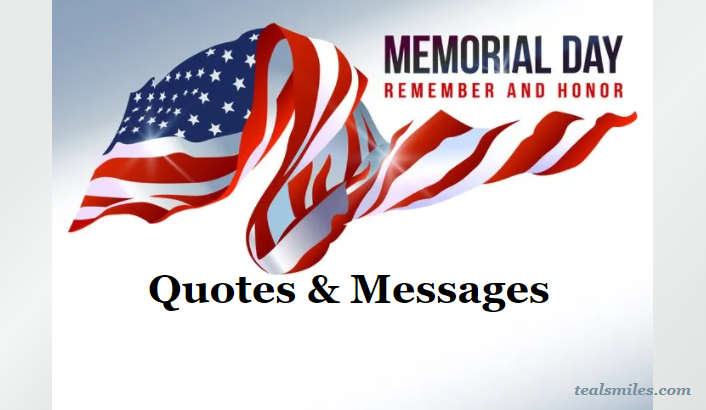 Memorial Day Quotes to Honor America’s Fallen Soldiers: Memorial Day is a time to honor, reflect, and remember those who’ve made the ultimate sacrifice for their country.

Are you looking for what write on a Remembrance Day card, WhatsApp statues, social media profile ( Facebook, Twitter, Instagram) in honor of fallen heroes who served to hold our flag high. Then, post will serve the purpose. Here’s 35 good memorial day quotes and messages that your can share with friends and family.

“It’s better to fight for something in life than to die for nothing.” — Gen. George S. Patton

“It doesn’t take a hero to order men into battle. It takes a hero to be one of those men who goes into battle.” — Norman Schwarzkopf

“Our flag does not fly because the wind moves it. It flies with the last breath of each soldier who died protecting it.”— Unknown

“Veterans are a symbol of what makes our nation great, and we must never forget all they have done to ensure our freedom.” — Rodney Frelinghuysen

“Who kept the faith and fought the fight; The glory theirs, the duty ours.” — Wallace Bruce

“Patriotism is not short, frenzied outbursts of emotion, but the tranquil and steady dedication of a lifetime.” — Adlai Stevenson II

“For love of country they accepted death, and thus resolved all doubts, and made immortal their patriotism and their virtue.” — James A. Garfield

“The brave die never, though they sleep in dust, their courage nerves a thousand living men.” — Minot J. Savage

“Our nation owes a debt to its fallen heroes that we can never fully repay.” — Barack Obama

“Home of the free, because of the brave.” — Unknown

“The brave die never, though they sleep in dust, their courage nerves a thousand living men.” — Minot J. Savage

“No man is entitled to the blessings of freedom unless he be vigilant in its preservation.” — Gen. Douglas MacArthur

“It is foolish and wrong to mourn the men who died. Rather we should thank God such men lived.” — George S. Patton

“To those in uniform serving today and to those who have served in the past, we honor you today and every day.” — Unknown

“A hero is someone who has given his or her life to something bigger than oneself.” — Joseph Campbell

“Freedom makes a huge requirement of every human being. With freedom comes responsibility.” — Eleanor Roosevelt

“America without her soldiers would be like God without His angels.” — Claudia Pemberton

“The patriot’s blood is the seed of freedom’s tree.” — Thomas Campbell

“We take for granted the very things that most deserve our gratitude.” — Cynthia Ozick

Salute to the heroes who gave their life for something bigger… the nation.

They never came back,
their silence lives on.

The brave hearts never die… they sleep in the embrace of their soil.

On this Memorial Day…
let the memories of the dauntless and valiant martyrs be with us.

May we never forget that this freedom came at the price of toil and blood.

They were smart, handsome and died young, all for us.
Salute to our fallen stars.

Thinking of you with pride on Memorial Day!

Remember our fallen heroes.
They are the reason that we are free.

On this day of prayer and remembrance.. let the memories of the gallant martyrs.. be with us.

A big thanks to all brave-hearted martyrs who laid down their lives for the country.

Though you have passed away.
And those who loved you dearly
Are thinking of you today.
We are forever grateful for your service
to our country and our people.

The brave die never, though they sleep in dust:
Their courage nerves a thousand living men.
Wishing you a peaceful and blessed Memorial Day

My warmest wishes on
Memorial Day [enter year] and deepest gratitude
for the ultimate sacrifice of our fallen heroes.

We are forever grateful for the ultimate sacrifice of those who died for the Unites States of America.
May their courage and dedication will never be forgotten.

Today we praise the men and women who sacrificed their lives in the name of our country. Their selfless devotion, outstanding courage, and honor should inspire us to make their sacrifice meaningful.