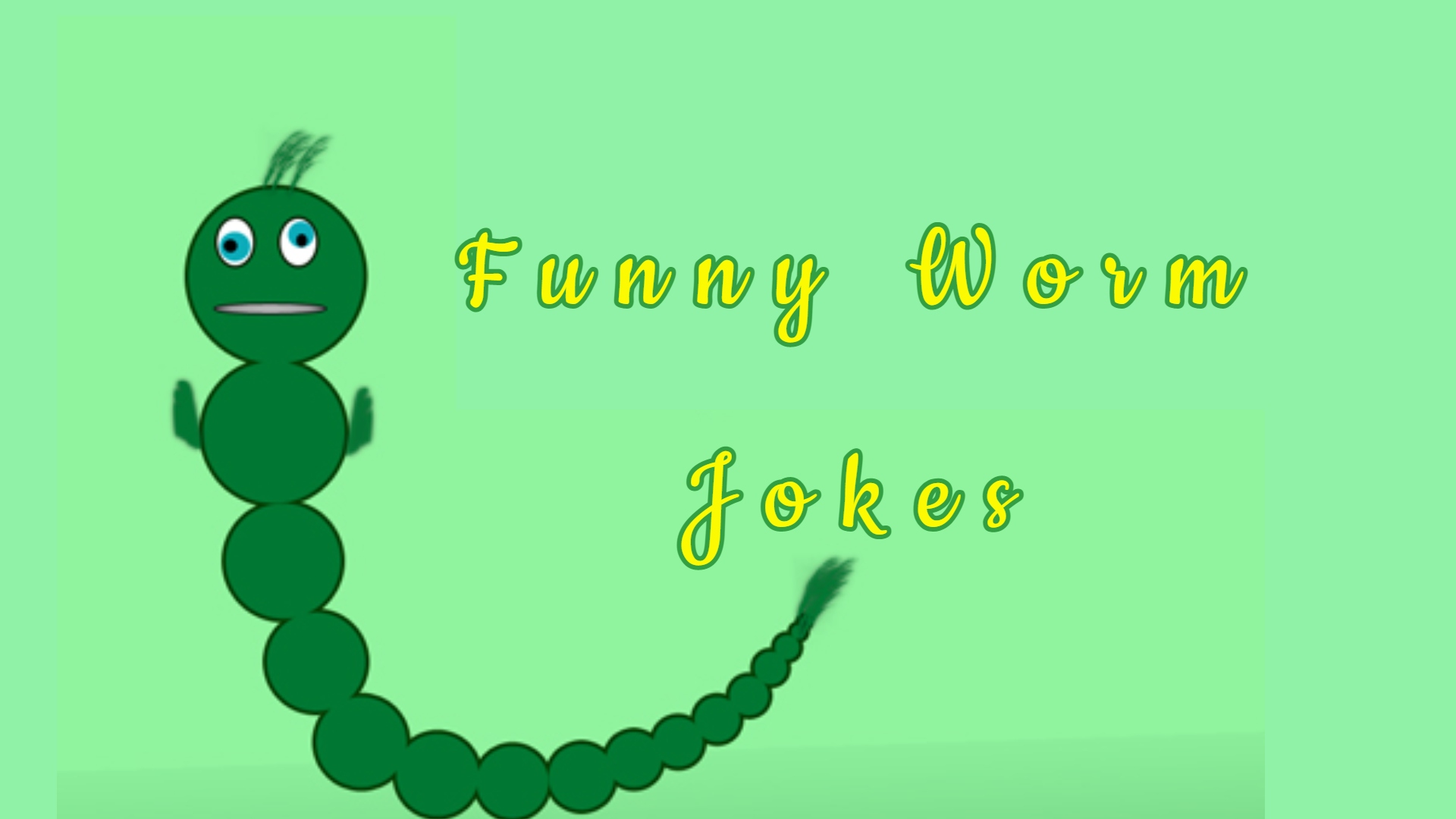 Best Funny Worm Puns and Jokes That Will Make You Wriggle With Laughter: Laugh at our compilation of funny Worm jokes suitable for both kids and adults. Whether it is earthworm jokes, Worm Questions And Answers Jokes, book worm jokes, or gummy worm puns, these will make you laugh out loud.

This is a great collection of silly and funny worm jokes for kids of all ages – and the worm jokes, riddles and puns are clean and safe for kids! ! ! We hope you enjoy this list of hilarious worm jokes.

Q: Can someone fish without putting a worm on the hook
A: The answer is debatable.

Q: How can worms travel faster than humans in space
A: By traveling through wormholes.

Q: How did the Archaeopteryx manage to get the most amount of worms for breakfast
A: He was an early bird.

Q: How do worms write messages
A: By compost-ing notes.

Q: How do you identify a tapeworm
A: Check and see whether it can measure something accurately.

Q: How do you make a glow worm laugh
A: Just cut off his tail, then he will be de-lighted!

Q: What did the worm say when he found that his daughter reached home late
A: “Where on earth have you been?”

Q: What did the worm say when he got stuck in the pumpkin
A: “I better worm my way out of this!”

Q: What do you call a worm who is not cool
A: Warm.

Q: What do you call an earthworm couple who are made for each other
A: Soil-mates.

Q: What does a lizard normally do at winter time
A: He worms himself up.

Q: What is the name of the maggot army that resides in rotten apples
A: The Apple Corps!

Q: What is worse than finding a worm in your apple
A: Finding half a worm!

Q: What kind of music do worms love to listen to
A: Underground music.

Q: What made the worm cross the playground
A: He wanted to get to the underground slide!

Q: What will happen if all the evil worms take over the world
A: Global worming!

Q: What will happen if fish get addicted to earthworms
A: They will be hooked.

Q: What would a bookworm do in a football match
A: Worm the seat.

Q: What would make a glow worm glow
A: Having a light meal for dinner.

Q: Why are worms considered to be great company
A: Because they are always down to earth.

Q: Why did the worm get exhausted after digging a little
A: Because he got in-dig-estion.

Q: Why was the glow worm so disheartened
A: Because her kids were not that bright!

Q: Why were the glow worms kept inside the bag
A: Because they tend to lighten the load!

All the worms bid good luck to the bride worm by giving worm hugs after the ceremony.

In a race between two worms, the end result was a tie.

In the glow worm beauty pageant, all the worms encouraged each other by saying “You glow girl!”

In the glow worm party, everyone was dancing to”Wake me up before you glow!”

Inchworms make great carpenters because they never miss an inch.

The glow worm had a suspicion that his wife had eaten all the cake. He realized he was right when he confronted her and she turned red.

The judge started the worm court session by hitting the hammer and saying, “All writhe, let us begin.”

The kid started telling a sour tale because he ate a whole packet of candy worms.

The most popular worm that’s used for wrapping gifts is a tapeworm.

Worms can easily measure their length by asking for help from a tape worm.

Q: What did the worm say to the other when he was late home?


A: Where in earth have you been!

Q: What did the maggot say to another?
A: What’s a nice maggot like you doing in a joint like this!

Q: Did you hear about the two silkworms that were in a race?
A: They wound up in a tie.

Q: What did the woodworm say to the chair?
A: It’s been nice gnawing you!

Q: What do you get if you cross a worm and a young goat?
A: A dirty kid!

Q: What do worms leave round their baths?
A: The scum of the earth!

Q: What do you get if you cross a worm and an elephant?
A: Very big worm holes in your garden!

Q: What reads and lives in an apple?
A: A bookworm!

Q: How can you tell if you are looking at a police glow worm?
A: it has a blue light!

Q: How can you tell which end of a worm is which?
A: Tickle it in the middle and see which end laughs!

Q: How do you make a glow worm happy?
A: Cut off its tail and it will be de-lighted.

Q: What is the maggot army called?
A: The Apple Corps!

Q: Why didn’t the two worms get on Noah’s Ark in an apple?
A: Because everyone had to go on in pairs!

Q: What does a turtle do during winter?
A: Sit by the fire and worm himself up.

Q: Who is the worm’s Prime Minister?
A: Maggot Thatcher!

Q: What kind of computer does a worm have?
A: A Macintosh.

Q: What happens when a Mexican gets to the worm?
A: He passes out.

Q: Why do worms have trouble getting up in the morning?
A: Because the early bird catches the worm.

Q: How do you make a glow worm happy?
A: Cut off his tail, he’ll be de-lighted!

Q: What does a bookworm do during a baseball game?
A: Worm the bench.

Q: Why are glow worms good to carry in your bag?
A: They can lighten your load!

Q: What do you get if you cross a glow worm with a python?
A: A 15 foot strip light that can strangle you to death!

Q: What do you call it when worms take over the world?
A: Global Worming!

Q: When should you stop for a glow worm?
A: When he has a red light!

A man in a movie theater notices what looks like a glow worm sitting next to him.
“Are you a glow worm?” asked the man, surprised.
“Yes.”
“What are you doing at the movies?”
The glow worm replied, “Well, I liked the book.”

Q: What did one gummy worm say to another?
A: “You mean the worm to me.”

Q: What is a worm without any teeth called?
A: A gummy worm.

Q: Why was the worm not moving?
A: Because he was a gummy worm.