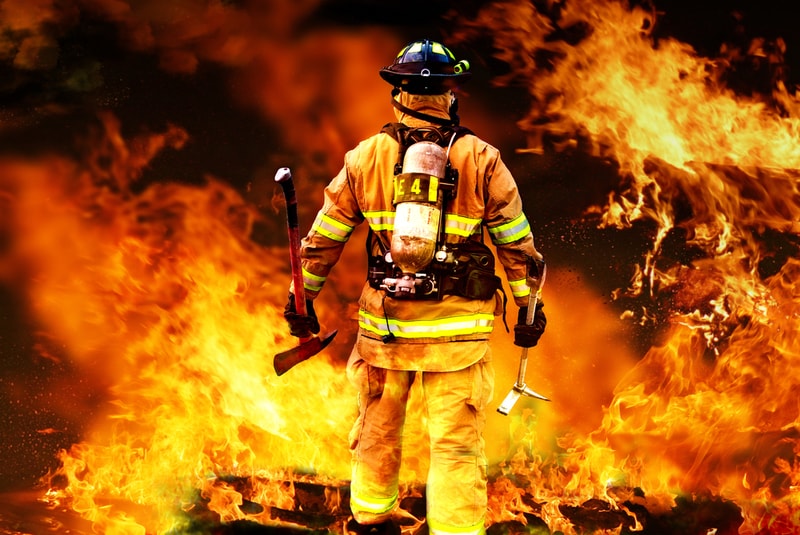 Hilarious Fire Jokes That Will Make You Laugh Out Loud. A firefighter’s job is no joke, but jokes about firefighters are something that every fireman will find hilarious! Here’s our take on funny firefighter jokes.

Q: Which English king invented the fireplace
A: Alfred The Grate.

Q: I watched a documentary about people walking on fiery hot coals.
A: It was sole destroying.

Q: Why couldn’t a man smell the smoke in his room
A: He’d burnt his nostril hair!

Q: I bought a friend a fire extinguisher.
A: He was de-lighted.

Q: What did the dad say when his son asked, “Are we breaking the rules by setting fire to the building
A: ” He said, “We are, son.”

Q: What happens when a cow tries to sneak past a dragon
A: You get a fine flaming yawn.

Q: How quickly can a wildfire start
A: Lightning fast.

Q: I searched online for something to light a fire.
A: It said, “No matches found.”

Q: What is fire to a pyrotechnic
A: Just a warm-up.

Q: What did the firefighter say when she saw the church razing down
A: “Holy smoke!”

Q: I just got a job at a factory that makes fire hydrants.
A: They would not let me park my car there.

Q: What do you call a woman who puts her credit card statements straight in the fire
A: Bernadette.

Q: What happens when wildfire tells you a joke
A: You get burned!

Q: Did you hear about the fire in the shoe factory
A: Many soles were lost.

Q: Why do ducks have flat feet
A: To stomp out forest fires.

Q: Why do elephants have flat feet
A: To stomp out flaming ducks!

Q: Did you hear about the fire at the circus
A: It was intents.

Q: My grandfather always said, “Fight fire with fire.”
A: He was a great man, but a terrible firefighter.

Q: Someone threw my ’70s records on the fire.
A: It was a disco inferno.

Q: What does a burning ember like to sing
A: “Goodness gracious, great balls of fire!”

Q: What do you call a ghoul who sits too close to the fire
A: A toasty ghosty.

Q: What did the fire say was his New Year’s resolution
A: “This year, I’m going to new Fahrenheits.”

Q: What did the collie say to the fire hydrant when he fell in love

Q: Why did the comedian burst into flames
A: He was on fire!

Q: What is a flame thrower’s favorite movie
A: Fast and Fiery-ous.

Q: Why did the match’s house party end in flames
A: It was lit.

Q: What do you call a jacket that goes up in flames
A: A blazer.

Q: What did the flame say to his buddies after he fell in love
A: “I found the perfect match!”

Q: How can flames afford to be so bright
A: Fire works.

Q: A guy with flame tattoo sleeves walks into a building.
A: Security stops him and says, “There are no firearms allowed in this building.”

Q: Why was the firefighter lovesick
A: He couldn’t get over his old flame.

Q: What do you call it when a flower shop bursts into flames
A: A florist fire.

Q: What do you do when you light a lamp with a match but it becomes too heavy to carry
A: You use a lighter flame.

Q: What did the statistician say when half his body was engulfed in flames and the other half encased in ice
A: He said, “On average, I feel fine!”

Q: What did the scientists say when a herd of goats suddenly burst up in flames


A: They said, “We still don’t know what the cattle-yst was.”

Q: What did the flame say to her friends after she fell in love
A: “I found the perfect match!”

Q: What do you call it when an arsonist turns himself in at the police station to get famous
A:  His claim to flame.

Q: What direction does an elevator move in when it’s on fire
A: It goes up in flames!

Q: Which band do dragons love to hear
A: The Flaming Lips.

Q: How do you think god kindles the flame of love between soulmates
A: With a match made in heaven!

Q: What happens when a group of arsonists that burned down the orchestra hall go up in flames with it
A: You have no symphony for them.

Q: What do you say when a chopper that Batman is flying bursts into flames
A: You say, “Christian, bail!”

Q: Why can’t you have a flame tattoo if you’re a teacher
A: Because schools don’t allow fire-arms.