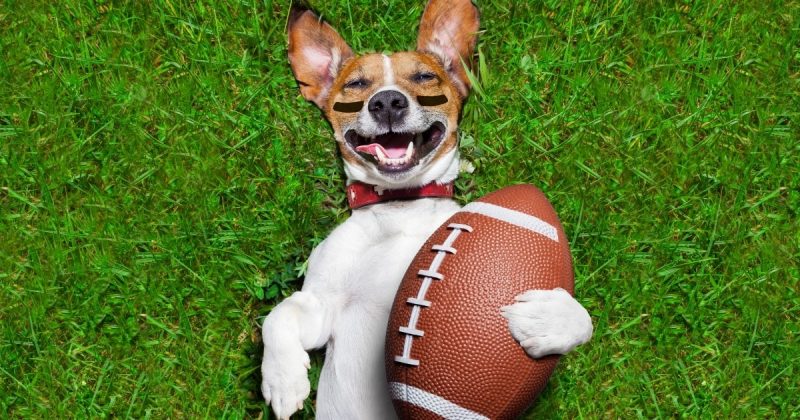 Best Animal Football Jokes:  Funny joke of the day is carefully selected joke. The Goal is to have funny joke every day. We hope you will find these animal football jokes funny enough to tell and make people laugh.

Q: “What does a tunneling rodent decide to do on 4th down of a football game?
A: Gopher it!”

Q. What did the bumblebee running back say after getting a touchdown?
A. Hive Scored!

Q. Why didn’t the dinosaur go to the gym?
A. ‘Cause he did not believe in the survival of the fittest. OUCH!

Q. Which stinging animal is suprisingly great at football?
A. The score-pion.

Q. Why didn’t the dog want to play football?
A. It was a boxer!

Q. What do you call the big monkey that scored the winning touchdown?
A. Chimpion!

Q. What are the rules in zebra baseball?
A. Three stripes, and you’re out!

Q. What does every sole fisherman want?
A. A gill-friend!

Q. How did T-Rex feel after his last killer workout?
A. Dino-sore!

Q. What is it called when a dinosaur makes a touchdown?
A. A dino-score.

Q. What kind of punch does a dog boxer throw?
A. A pupper-cut!

Q. What is a dog’s favorite sport?
A. Formula 1 Drooling!

Q. Why aren’t centipedes allowed to play on the bug football team?
A. It takes too long to put their cleats on.

Q. What is it called when a dinosaur hits a homerun?
A. A Dino-Score!

Q: Which are the best animals at football?
A: A score-pion

1.. A team of little animals and a team of big animals decided to play football.

During the first half of the game, the big animals were winning.

But during the second half, a centipede scored so many touchdowns that the little animals won the game.

When the game was over, the chipmunk asked the centipede,

“Where were you during the first half?”

He replied “Putting on my shoes!”.

Some flies were playing football in a saucer, using a sugar lump as a ball. One of them said,

“We’ll have to do better than this, lads. We’re playing in the cup tomorrow.”

A team of mammals were playing a team of insects. The mammals totally dominated the first half and at half-time were leading 39-nil. However, at half-time the insects made a substitution and brought on a centipede.

The centipede scored no less than 180 goals and the insects won the game by miles. In the dressing room afterwards the captain of the mammals was chatting to the insect captain.

“That centipede of yours is terrific,” the captain of the mammals said. “Why didn’t you play him from the start?”

“We’d have liked to,” replied the insect captain, “but it takes him 45 minutes to get his boots on.”

The animals were bored. Finally, the lion had an idea. “I know a really exciting game that the humans play called football. I’ve seen it on T.V.”

He proceeded to describe it to the rest of the animals and they all got excited about it so they decided to play. They went out to the field and chose up teams and were ready to begin.

The lion’s team received. They were able to get two first downs and then had to punt. The mule punted and the rhino was back deep for the kick. He caught the ball, lowered his head and charged. First, he crushed a roadrunner, then two rabbits. He gored a wildebeast, knocked over two cows, and broke through to daylight, scoring six.

Unfortunately, they lacked a placekicker, and the score remained 6 – 0.

Late in the first half the lion’s team scored a touchdown and the mule kicked the extra point. The lion’s team led at halftime 7 – 6. In the locker room, the lion gave a peptalk.

The second half began. Just as the mule was about to kick off, the rhino’s team changed formation and the ball went directly to the rhino. Once again, the rhino lowered his head and was off running. First, he stomped two gazelles. He skewered a zebra, and bulldozed an elephant out of the way. It looked like he was home free. Suddenly at the twenty yard line, he dropped over dead. There were no other animals in sight anywhere near him. The lion went over to see what had happened. Right next to the dead rhino he saw a small centipede.

“Did you do this?” he asked the centipede.

“Yeah, I did.” the centipede replied.

The lion retorted, “Where were you during the first half?”

“I was putting on my shoes.”